Robert Rauschenberg was born in 1925 in Port Arthur, Texas. During his service in the US Marines he discovered his aptitude for drawing and an interest in artistic representation of everyday objects and people. After leaving the Marines he traveled to Paris where he studied on the G.I Bill. After less than a year he moved to North Carolina to study at Black Mountain College. Soon after he decided to move to New York and make it as a painter. Rauschenberg’s fascination by popular culture and rejection of the seriousness of the Abstract Expressionists led him to search for a new way of painting. He began using untraditional materials in his work such as house paint, colored car wheel. In 1958 he had his first solo show at Leo Castelli Gallery in New York. By then he moved from abstract painting to drawings that he referred to as “combines.” These remarkable combines meant to express both the finding and forming of combinations in three dimensional collage. As Pop Art emerged in the 1960’s, Rauschenberg turned from three dimensional combines to work in two dimensions, using magazine photographs of current events to creating silkscreens. From the mid sixties through the seventies he continued experimenting in prints by printing onto aluminum, Plexiglas disks, clothes, and other surfaces. Through the eighties and nineties Rauschenberg concentrated on collage and new ways to transfer photographs. In 1998 he had a retrospective exhibition at the Guggenheim Museum including 400 of his finest works.
For over half a century Rauschenberg’s profoundly moving art has been an immense source of fascination and inspiration to many. Rauschenberg died in 2008.

Robert Rauschenberg $6,000
Adding to cart
Out of stock 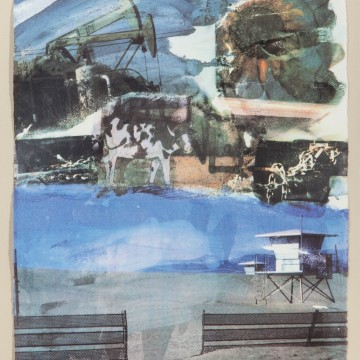